The Webley MK IV revolver pistol originates at the end of the First World War when the British army decided to adopt a caliber more suitable for modern warfare from 455 to 38 and Webley & Scott presented a project that it derived directly from the already existing MK VI but with a smaller caliber. But the project was not selected but commit to the Royal Small Arms factory which built the Pistol, Revolver, No. 2 Mk I and it'll be adopted as an official weapon of British Army resulting in a lawsuit against the British government. After the start of the WW2, RSAF Enfield, not being able to meet all the requests, however, resulted in a considerable purchase of MK IV.

Replica made of metal like the original, hammer and trigger release, rotating cylinder. The cylinder cannot be opened. Made specifically for re-enactors and collectors for whom no authorization or permit is required. 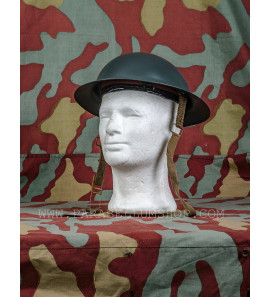