The origins of the Thompson M1928 submachine gun date back to World War I when General John Taliaferro Thompson began his studies for a semi-automatic rifle to replace the bolt-action rifles. Only in 1921 did we arrive at a first production with a very expensive model called M1921 which will have a mediocre success with the sale of some lots to the American police, some armies of South America and other exports. In 1938 the US Army will adopt the Thompson in two main models: M1928A1 (used with drum or vertical magazin) and M1 or M1A1. During the Second World War 1,500,000 pieces will be produced and used not only by the US Army but also by the British and Canadian army and supplies also to the Red Army which, however, lacked ammunition.

The Thompon M1928 was generally assigned to scouts, non-commissioned officers, patrol leaders, officers, tank crews and teams that made raids on enemy lines. It was widely used by British and Canadian Commandos as well as by American paratroopers and Rangers units for which it was particularly appreciated for its large volume of fire and ammunition power making it suitable for their missions.

The replica is made of metal and wood, with blowback mechanism, trigger, double position shutter, removable magazine. Made specifically for re-enactors and collectors for whom no authorization or permit is required. 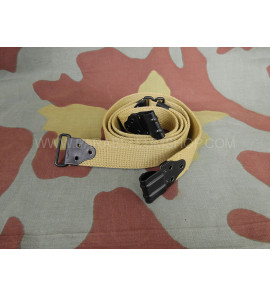