Reproduction of the breastplate magazine pouch for the Italian MAB, Moschetto Automatico Beretta, in the version called Samurai due to its resemblance to Japanese armor, and appeared before September 1943 in some specimens deriving from the models of the Avorio Aerostatica but with greater simplification by removing padding, grenade-carrying belts and the back part. Made up of five double-opening compartments of the first models, closed with a stitched leather tab and fixed with a metal pin. Double layer of canvas and at the upper ends two extensions to which a cotton sling is sewn, while in the lower part two buckles ensure the closure and fixing when worn. 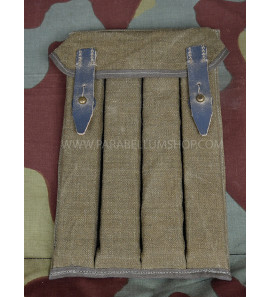