The medal was intended to award recognition to Italian and German troops who had taken part in the campaign in Northern Africa between 1940 and 1943. Approved by the Superior Command of the Armed Forces of Libya, it was never officially adopted by the Regio Esercito Italiano. The Wehrmacht instead officially adopted it by initially authorizing the use of the ribbon, which was already in use since 1942 also among the Italians thanks to the measures taken by the Germans. His official approval can be traced back to a telegram dated 7 January 1943 to the Italian Supreme Command, which was followed by the various regulations for the concession by the various general staffs without however ever officially coming to Italy.

The transfer of Madaille fur den Italienisch-Deutschen Feldzug to Afrika ceased on March 29, 1944 following the breaking of the alliance with September 8, 1943. 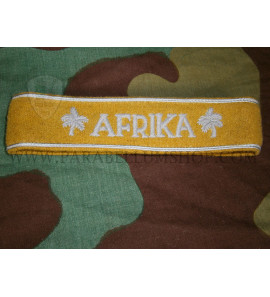