Nice reproduction of the M43 trousers made of Italian M29 camouflage fabric and supplied to the German army during the Second World War. On 8 September 1943 as a result of the Achse operation which set itself the goal of absorbing the capitulation of the ex Italian ally, the German army will come into possession of the Italian strategic reserves including large quantities of M29 camouflage fabric which was used to make different camouflage garments and used both in Italy and on the Normandy front.

The replica reproduces one of the various models of trousers that will be made with the Italian M29 camouflage and in particular the M43 trousers of which it follows every detail. Camouflage will be employed by many units of the German army. 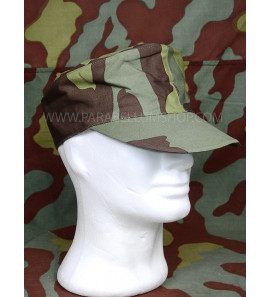