NCO AND ENLISTED FIELD CAP M44 FOR WAFFEN SS, MADE BY EREL OF ROBERT LUBSTEIN

The best replica of the feldmutze, the WW2 German Army visor cap, on the market and made by Erel of Robert Lubstein the famous Berlin cap factory, carried on by his heirs. From its high quality of production and the materials used it is difficult to say whether it is a replica or a contemporary original, made with the same methodologies and the same models that the company used in the 30s and 40s..

The Feldmütze M43, or einheitsfeldmutze, was the wool field cap, one button variant of the M43 model, that was going to replace all the previous side cap models and soon it became hugely popular for due to its practicality and usefulness. Clearly inspired by the Alpine troops cap, the bergmutze, the feldmütze M44 was provided to all corps and to paramilitary and civil organizations of the Germany between 1943 to 1945. The one button model, appeared too late than two buttons cap, is in field grey wool and, though was generally used by all Army units, it's more common on Waffen SS units. 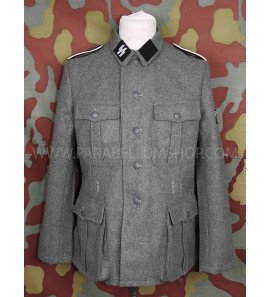 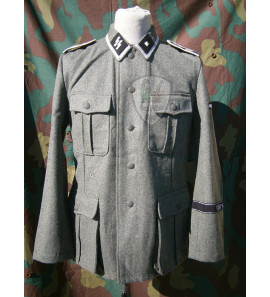