Nice mountain glasses with dark lenses, coming from the Swiss Army, but the same model used by the German Army in the Second World War for Alpine troops, the Gebirgsjäger, and often in general on the snowy battlefields of the Eastern Front and which were generally provided in different shapes. They consist of a metal husking to which the lenses are locked, and a special border to shield the metal part of the frame from direct contact with the skin in the freezing condition. The fastening and the nose bridge are made with a strip of fabric.

The mountain goggles are old stocks of the Swiss army. Are originals and the conditions and appearance may vary between the different pieces and with different states of conservation. The metal boxes can have signs of impact, scratches, abrasions, oxidation or wear. Even the lenses can differ in the color of the frame, state of conservation and wear. The integrity of the lenses is guaranteed. The photos are only intended to present the product in general, constantly varying according to availability, they do not exactly show the product that will be shipped. 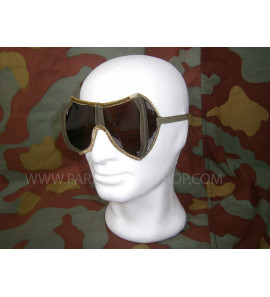